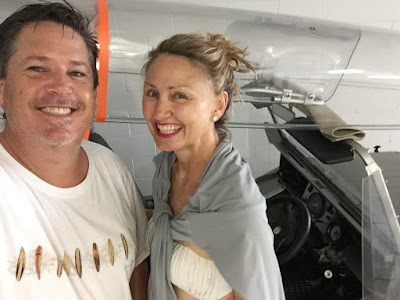 Truffles? First things first, find it then soil test.... Still so excited as we have lived and learned so much via Tabby Tabby Island off the grid eco living and then Sarabah Estate Vineyard wedding and wine. We can build our Noosa farm exactly how it should be with this knowledge starting I think with a stone barn with the biggest fireplace you have ever seen! tm & c x
Posted by Dune Road at 4:32 AM No comments:

Well I thought i was OK on the controls but these guys kick it !!!
The Gold Coast City Council (GCCC) employes Professional Helicopter Service (PHS), the same company we started to learn with on the Gold Coast, to spray for mosquitos from choppers and watching these blokes throw the Bell's around like they are R22"s is awesome. A little "Apocalypse Now" but most certainly an amazing rush even from the ground.
The video doesn't quite capture the fact that this big chopper is only about 10 to 15 metres above the ground just out of IGE and the massive blades reverberate inside your chest... what a rush!
Bish
OK, so I cant make the bloody video work so here is a link to Callvm & I flying......
http://www.youtube.com/watch?v=LBJjHAzMW5M
Posted by Dune Road at 4:31 AM No comments:

Email ThisBlogThis!Share to TwitterShare to FacebookShare to Pinterest
Labels: Helicopter 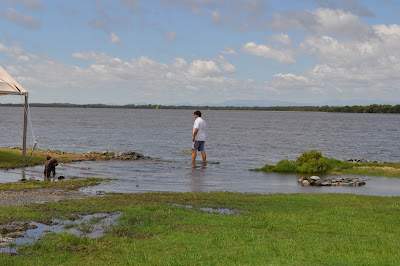 King Tides at Christmas meant we had no boat ramp as such! You could drive your boat right up onto the island basically. Here's Cameron 6 inches deep about a metre into our island. D loved it and was so confused as to what was happening. I tried to explain it to him but he didn't seem to get it... See our bonfire site, water logged.
tm x
Posted by Dune Road at 3:02 AM 1 comment: 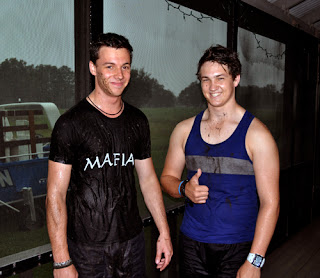 Andrew Scott MacKenzie and Callvm using the quads to get dirty... 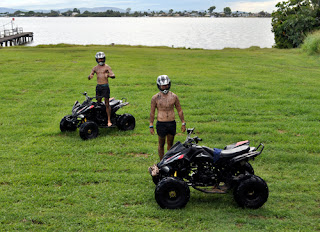 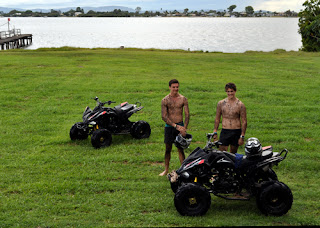 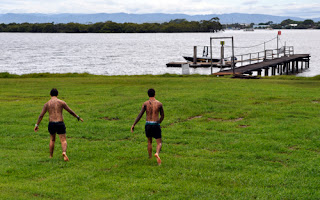 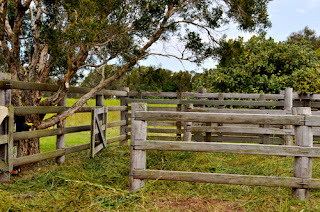 Esther from Stanmore Park Alpacas has now been to inspect our island for noxious weeds, potentially harming our pure bred alpacas, Anzac Jack and Joshee, when they come to live with us this week!
AJ is mine, he is so dark as you can see below on the left and his fleece is so fine, micron count at 18.7 which is very high and makes him very valuable! Joshee's baby photo is on the right though he is much more caramel now and his micron is 16.7! So another good choice! 2 males, remember, with a future stud program going on once we are settled. Cameron thinks Joshee is the man for the job but we will see won't we?!
We now have their pedigree folders and all their details, certificates and the like so we even feel like we know what we are doing! Alpaca breeders though not officially until we get the Alpaca Association to sign off our memberships! Dune Road Alpacas is the name we are applying for as we already own the registered business name. Wicked cocktail sauce sales happening slowly awaiting our online appearance soon!
Esther is madly working on halter training our baby boys so we can manage them easier. The above pen is actually the cattle crush as built by our predecessors and will work well Esther said except for 1 thing!
Alpacas roll!
They actually get down on the ground and roll under the fence to escape! Now, where they are going to go on our 168 acres is anyone's guess, the concept of an island being that they can only get so far! Water all around and not keen swimmers either! Yet we don't want them to get injured or bogged, of course, so control is the key and it seems we need to chain mail these timber fences so that's this coming week's job!
Hey, if you want to talk to Esther, here she is! http://www.stanmoreparkalpacas.com.au/contact_us.html
tm x 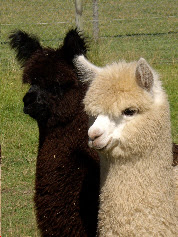 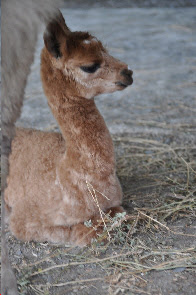 Email ThisBlogThis!Share to TwitterShare to FacebookShare to Pinterest
Labels: Alpacas

How to Move Barge in Post Rain Sog Bog 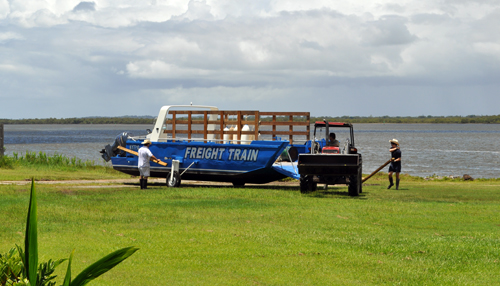 Incredibly, amidst all this incessant rain, we have had a few dry spells and we actively grasp the opportunity to move things from the mainland to our island (supposed) paradise via our barge.
However, it's stinking heavy and gets bogged!
So the boys' ingenious way to avoid digging her out of the mud is to amortize the massive weight of the Freight Train barge from all weight on 2 trolley wheels and tyres to it spread along thick timbers. They walk along to the sides but between the tractor and FT and place hardwood timbers under the wheels and this spreads the point of contact of 3 tonnes from onto the 2 trolley wheels to over 2.5 metres. Effectively staying on top of the mudholes and using up more surface area. Then, once the tractor has dragged FT over the timber they move it again. Slow going but very successful and easy with 3 men!
Great thinking, Rome was perhaps water logged as well? A yes, the aqua viaduct!
tm x 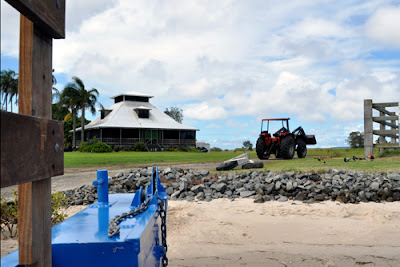 Sugar for my Sweetheart 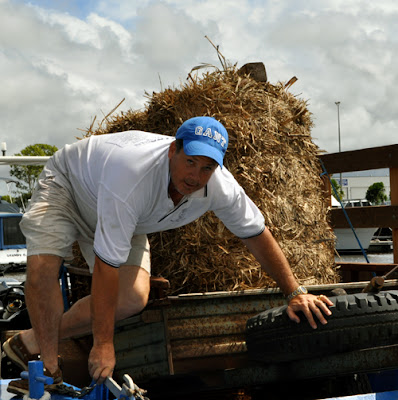 Well it's true, Cameron knows and loves me so much, despite all behaviour to the obvious contrary, when he bought me a sweet gift - sugar cane mulch - SUPERSIZED!
Ken, our caretaker, thought Cameron was kidding when he asked him to help out delivering me a gift and was then completely shocked as to how thrilled I was. Ken has never seen my now sold Apex St vegetable garden and the serious produce we enjoyed nightly for dinner. My organic augergines or eggplants to some, were the best you have ever tasted, we even weighed and recorded them they were so shiny and heavy - just like a bought one!
My latest LOCAL NEWS is also that the BEST vegetable seedlings in Brisbane Metro has got to be the Underwood Bunnings garden centre. We decided to exit the wicked peak hour Gold Coast highway traffic the other night and spend an amazing hour amongst and awesome array of established veges including black tomatoes and purple carrots, nice strong roots, shiny green leaves, WOW!
Now all this rain had a purpose, mulch and melt my sugar cane and grow my sweet veges!
Thank you Bish love toni x 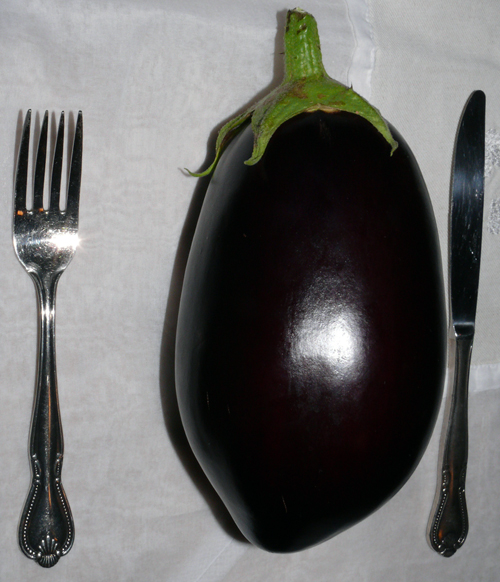 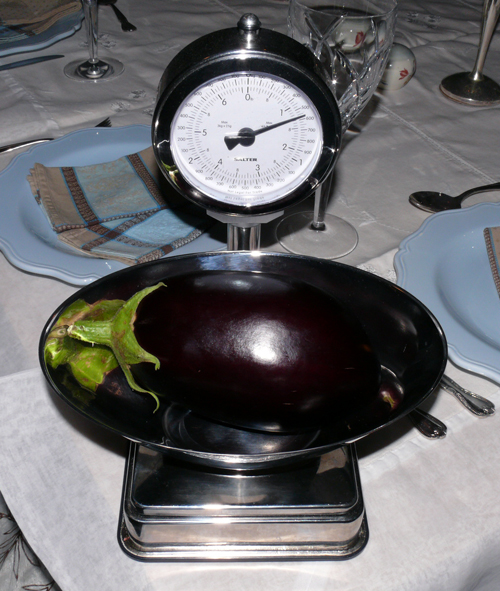 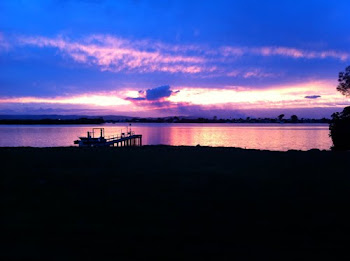 Our favourite time of day, after the raucous birds quiet into the twilight